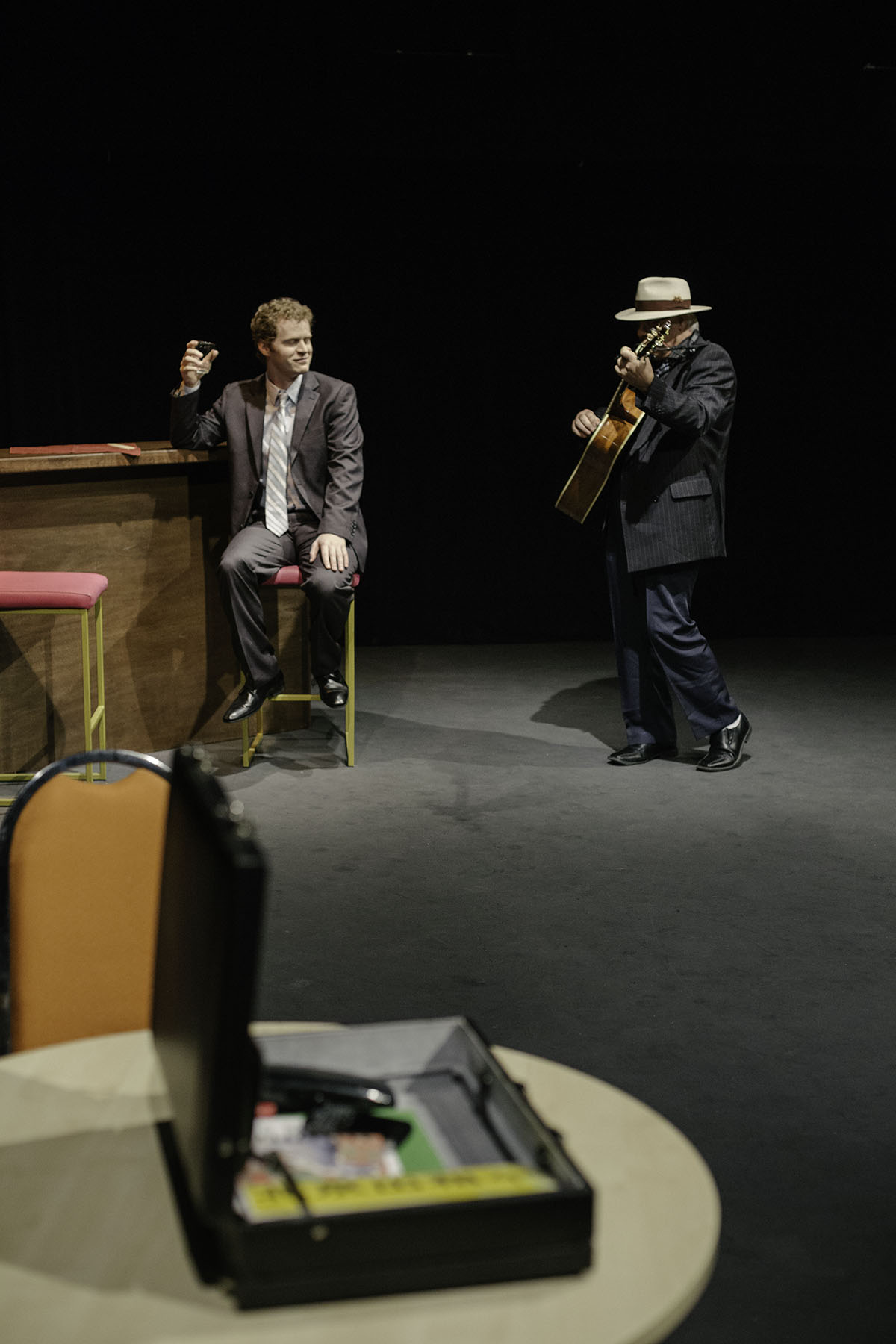 As a “stage hand” on tour with the intercultural play Our Man in Beijing by Moni Storz, I learnt many things…

The plane, an Air Asia “Firefly”, touched down on the tarmac of Langkawi Airport, Malaysia, at 4.40pm on Thursday 23 May 2013. The flight had taken a mere 22 minutes from Penang.

Moni was at the airport to meet me. After the customary hug she led me to a hired car and drove me to Sugar Restaurant where Our Man in Beijing was to be performed. There I met the first cast member David Lih who was sunbathing on a lounger. I went off to have a coconut and sat on a lounger to enjoy the sight and sound of the waves lapping against the shore. Later that evening I met the other cast members and crew. We walked from Sugar Restaurant to Fat Cupid Restaurant for dinner. There I met Phil Trainer, the composer and singer of You Know, the theme song of Our Man in Beijing.

Earlier in the car, Moni, who was the producer as well as the playwright, had mentioned to me the shortage of a stage hand and hinted I might be able to help them out. I had never been a stagehand before so I thought it might be fun and agreed. At this juncture, I must say the nearest I have been to a play was walking past the theater in Windsor, England, and walking along Shaftsbury Avenue in London.

After dinner Phil gave me a lift back to Sugar on a motorbike. That was fun and a relief as I had sprained my ankle prior to my arrival in Langkawi. I was soon to be the one and only limping instant stagehand in Langkawi!

I had never seen the script so I had to work closely with Wolf, the director who doubled up as the other stagehand. So not only was I limping, but I was also working as a stagehand, “blind”. Wolf taught me how, where and when to put up the big prop, “Beijing International Airport” and the small props, and just as importantly, when to take them off. Not being fully familiar with the play, sometimes I had to rely on a signal or gesture from Wolf. So I learnt to work closely with him.

The next day the cast members, Richard and I went up a mountain by cable car. The scenery was breath taking. Then we went to a nearby waterfall by taxi. During this excursion we did a lot of walking and climbing up and down many steps. Enjoyable though the day was, it was probably not the best preparation for opening night. I did not feel guilty because officially I was on holiday and just helping out as a stagehand. I thought it was probably better for the cast to rest and relax.

Generally speaking, the cast and crew worked well as a group. There were no “prima donnas” among them. In fact, they were a friendly, easy-going bunch of people. I noticed before rehearsals began they each went their separate ways clutching their scripts and mumbling to themselves while Wolf, the director, and I got the stage ready for the opening scene. Occasionally they stopped to consult Wolf on certain points. He was a very experienced director and explained the points to them clearly and concisely. Sometimes two of them would go to him to ask him to clarify certain parts of the script, for example, Ashley, the male lead and Siew Yong, the female lead, would ask Wolf how they should interact with each other in certain scenes. He would instruct them with great authority. He always spoke very clearly. Sometimes he would shout at the cast to restore order. Apart from that, he would leave them to revise their scripts and get themselves mentally ready in their own way. As rehearsal time approached Wolf would call them back. During rehearsals sometimes he would stop them at certain scenes and explain the finer points of the script to them and ask them to start again from certain points. As a result, some rehearsals seemed to drag on and on. However, there were a couple of interesting moments.

On one occasion, I overheard Siew Yong saying, “I am not kissing him.” She was referring to the last scene where the female lead had to kiss the male lead. It was not clear whether they took the matter to the director, but they resolved this matter by doing a “pretend” kiss at the end of the play behind a hat held by Siew Yong to hide it from the audience.

Sometimes a cast member would forget his or her lines but covered this up very cleverly by improvising. In the final show in Kuala Lumpur, Ashley could not open his brief case. In a blind panic or a flash of quick thinking or both, he rushed off the stage to as if to chase the taxi driver for the combination code of the briefcase. He re- appeared on stage, calm and composed to carry on with the show!

Perhaps the most encouraging lesson I have learnt is: you can lose your briefcase and your job and still get the girl. I certainly realised it took a lot of hard work, time and money to produce a play and even more dedication and effort to get it performed. Would I like to write a play, produce it or act in it? The answer is “No” to all three questions. I would rather write about it.

5 thoughts on “Views Of An Instant Stage Hand”